In the United States, Laser is classified by the Food and Drug Administration(FDA).

Laser power under 1mW is categorized as Class 2/II, it is considered to be safe because the blink reflex (glare aversion response to bright lights) will limit the exposure to no more than 0.25 seconds. It only applies to visible-light lasers (400–700 nm). This laser will not cause any harm to skin or eyes.

Between 1mw and 5mW belongs to the Class 3A/IIIa. A Class 3A laser is considered safe if handled carefully, with restricted beam viewing.
With a class 3A laser, the MPE can be exceeded, but with a low risk of injury. Visible continuous lasers in Class 3A are limited to 5 mW.
For other wavelengths and for pulsed lasers, other limits apply.

Class 3B/IIIb lasers are the power levels of 5 mW to 500 mW. These lasers will produce an eye hazard if viewed directly.
So the safety goggles are needed, it can protect your eyes from the direct strong light.

Beyond 500mW is Class 4/IV laser, also is the highest and most dangerous class of laser.
A class 4 laser can burn the skin, or cause devastating and permanent eye damage as a result of direct, diffuse or indirect beam viewing.
Class 4 lasers must be equipped with a key switch and a safety interlock.

Generally speaking, we think 5mW is the dividing line to recognize safe or not.
Because our eyes maybe feel uncomfortable while staring at the laser over 5mW for long.
This is why lasers above 5mW are not allowed to get into the US by the FDA.

But let’s talk about how the FDA come up with this power.
They have done scientific tests to find the absolute lowest power that could damage your eyes,
with every worse possible condition (basically point blank range, low divergence, the most sensitive part of your eye, etc.).

In fact, all those worse possible conditions will not happen in one case.
UNDER NORMAL CONDITIONS a 6mW laser is extremely unlikely to cause damage. Especially considering that almost every hit will come from a distance, or a reflection which will distort the beam, double the distance and lower the power of the laser. With most accidents, the beam will have diverged/diffracted to a point where it isn’t even a danger. Most people picture getting hit with a laser beam as the beam being exactly as it comes out of the device, and if you could recreate the incident, the beam would most likely not be the same.

After all, they are just exaggerating to the point of telling you the worse conditions, and under normal conditions, you could probably get hit with a random reflection from a 15mW laser with no problems.

If you have any doubts or suggestions, please feel free to contact us! 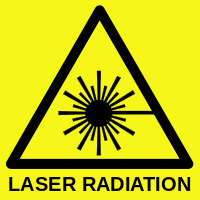